This page features some of my photographs that deserve a more detailed look. Accompanying each image is some brief descriptive text, either about the photo itself, taking it, or in general why it was taken. Click on an image to see it at full size. 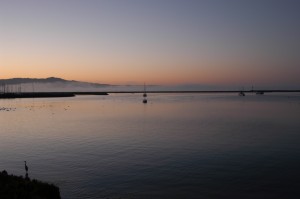 After flying in from the UK the night before, arriving in thick fog, getting up early the next morning because of the jet lag, we had the most fantastic sunrise, with just a bit of bay area mist.

You really can imaging that there isn’t anything else for 8,000 miles! 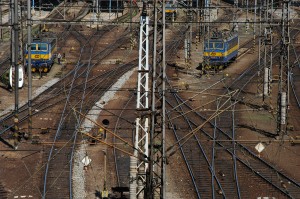 This shot was taken of the railway lines into Prague Central Station. I had to stand on tip toes to look over a wall on a bridge.

I was initially confused by the photograph. I thought that there was some digital error and the picture had been doubled.  It takes a while, and is a bit like one of the spot the difference pictures, but you work it out.

Personally, I like the lines, the flat tonal palette, and the way that the colour of the engines stand out. 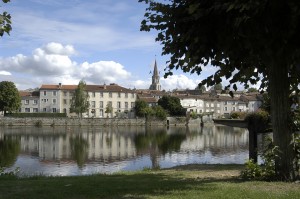 It was late Sunday afternoon. Christina and I had gone out for a walk.  We sat on a bench by the river running through the middle of Confolens, and I took a couple of photos. There is absolutely no digital trickery with this photograph. These are the local colours. It just looked like that. With amazing reflections on the river.

Even of its time in 2003, I realised that digital photography was very much the equal of film, and offered me so much more in terms of capability.  I could effectively change the film speed for every picture that I took. 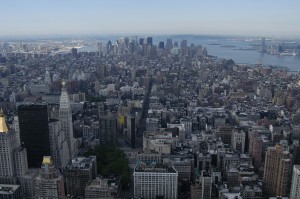 Your first view of Manhattan is always one you remember. You just can’t believe how much there is in such a small space.

I think it is the enormity of it all. Walking through canyons of buildings.

This shot was taken from the observation deck on the 86th Floor of the Empire State Building.  You begin to get a feel for the size and makeup of the city. But you just can’t get it all in.

I really like the water towers on the tops of buildings. 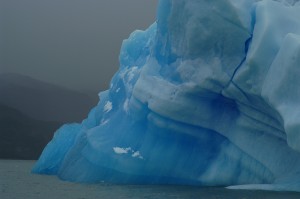 The ice looks blue because it has been compressed, and that alters the reflection of the light, turning it blue.

A fellow traveller, standing near me on the boat, and bizarrely with the same camera, said “You will never get the blue to show up on the photograph“.  Err, no.  Looks blue to me!

The blueness is especially highlighted by some fresh snowfall. 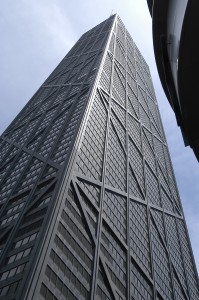 I think it is an optical illusion that makes it seem taller because of the taper towards the top, and the solid trapezoid shape.

What the Hancock Tower does do is afford the best view of the Chicago skyline.  After visiting the observation lounge, spend some time in the 94th floor Café, soak in the view,  and really get a feel for the architecture of the city. 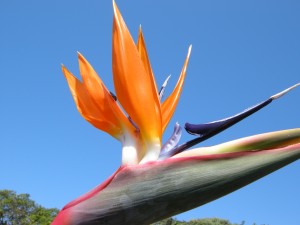 Sometimes as photographer you just have to get too close. What I really like about this photo is the colours, the orange set against the SoCal blue sky.

And to trip over such a fantastic example just growing wild. 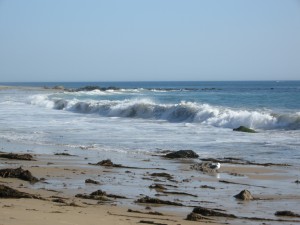 We had taken a short walk down the cliffs to the shore. I begin to see the attraction of surfing, especially with waves like this coming into the beach.

I took a  lot of photos of the surf rolling into this beach. Anyone of them could have appeared here. I chose this one because it is the nearest moment to the wave finally breaking.

I took several photos from the same spot and created a simple surf animation.

Sometimes you just have to marvel at the beauty of nature. The patterns that the retreating water had made in the sand on this beach as the  tide went out were fascinating.

The light was just right. The reflections giving depth. The level of detail in the picture. The background of the rocks on the beach. Everything just came together.

Shame our feet got wet with the next wave in! 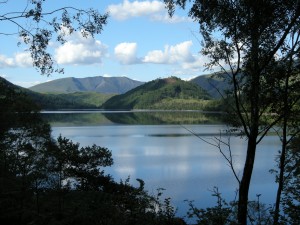 How much more like a chocolate box or biscuit tin lid can the Lake District actually look.

This shot is taken looking North from the Northern end of Thirlmere.  The water was almost still. Fantastic blue sky and puffy white clouds.

Had we waited then the perfect reflection shot might have been available. 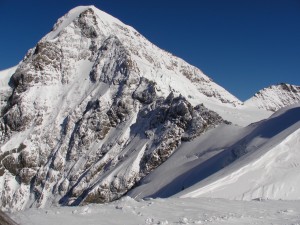 This isn’t the Toblerone mountain, but you can begin to see where they got the idea. This is the Mönch in the Bernese Oberland, Switzerland. It is the peak sandwiched between the Eiger and the Jungfrau.

This shot is taken from one of the outside viewing areas at Jungfrau station. Perfect blue sky. Slightly cold at -11°C, and nearly 12,000′ high, but we were well wrapped up. 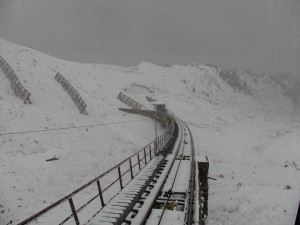 Believe it or not this is a colour photo. If you look hard enough you can just about see some colour in the cable wheels between the railway tracks.

This is near the top of the Niesen mountain in Switzerland. This actually is the Toblerone mountain. Obviously the White Topped edition.

It was misty at the bottom of the mountain. As we came out of a small tunnel near the top we must have crossed the snow line, and entered a blizzard. It was like another world. 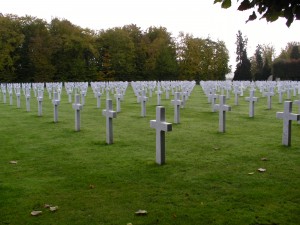 One of the many War Graves in Northern France.
(Saint Mihiel American Cemetery.)

Earlier in the year we had watched the TV series Band of Brothers which made it all the more poignant.

Both of my Grandfathers fought in the Second World War. One in the Pacific, the other in Northern France.

Lest we not forget. 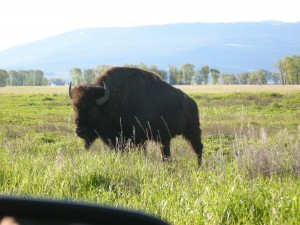 It is not very often on holiday that we go out before breakfast, but this was one of those occasions. We got up early to catch the sunrise over Teton, and had a few minutes left before heading back for breakfast so we visited Antelope Flats.

We had to stop as a herd of buffalo crossed the road in front of us.  The buffs seemed friendly enough, though we were not about to test that theory. 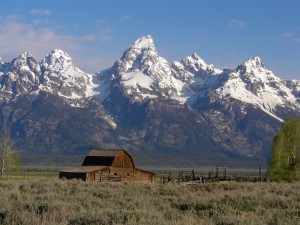 Little did we realise that when we turned round to head back for breakfast, after seeing the buffalo, that we would be presented with the iconic Grand Teton view.

This barn must appear in thousands of photographs and luckily for us looked fantastic in the early morning sunrise.

You can even see one enthusiastic photographer getting in really close! 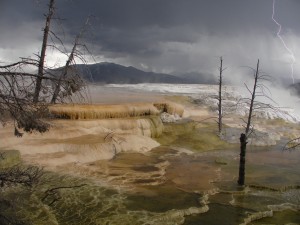 If you have ever wondered what an alien world might feel like then Mammoth Hot Springs is a good start.

We headed out onto the boardwalk above the steam and sulphur. Then it started to rain which developed into a thunderstorm.

I think this is the first time I have ever photographed lightning. 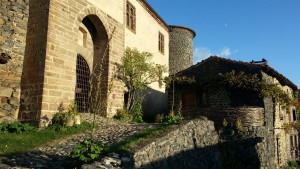 Deep in the Auvergne, set on one of the hill tops in the Allier gorge is the little village of Saint-Arcons-d’Allier.

This is a picture of castle, formerly the Deux Abbesses hotel.

This is one of the hidden gems of France and a great place of peace and tranquility. 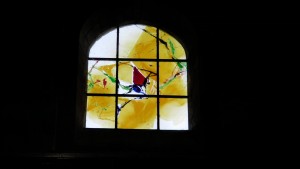 This is a stained glass window from the Roman church in Brioude, central France.

The windows were damaged in the 2nd World War and have been replaced with a modern interpretation. 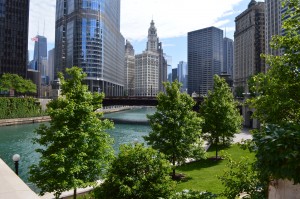 This is a view of riverside in central Chicago looking over the Vietnam War Memorial.

A peaceful spot in all the hustle and bustle of a very busy city.

To really see the city’s architecture take a boat ride along the river. 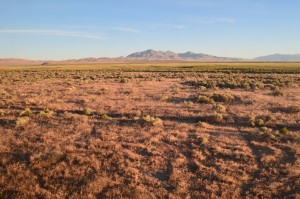 Early morning sunrise in the Nevada desert. Somewhere outside Winnemucca.

We were aboard the California Zephyr, travelling from Chicago to San Francisco.

Our train stopped here for 4 hours because a goods train ahead was blocking the line.

Solitude and silence. Sometimes the world can seem very large. 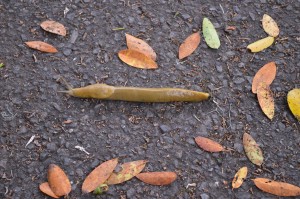 Visiting Point Reyes National Park, on the Pacific Coast 50 miles north of San Francisco, we were struck with how the flora and fauna looked very similar to back home in England.

Until we crossed paths with a Banana Slug that is!

And no, I didn’t artistically arrange the leaves, it just looked like that 🙂 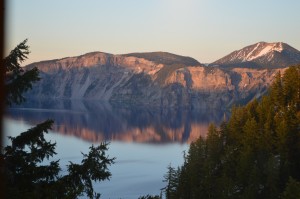 The view of sunset from our room in Crater Lake Lodge, Oregon.

When we arrived the evening before it had been snowing and -2ºC.

We have since been told that some people visit for a week and there is so much mist and fog that you can’t even see the lake.